Plan Your Next Golf Outing Now!

Governors Run is an ideal location for your next golf outing. Our stunning course conditions, convenient location and unparalleled service has made us the number one choice for golf outings in Illinois. Our outing program is beyond comparison. With just a phone call, we’ll tailor a specialized event to match the needs of your group. Our outing services team will assist you during the planning phase and ensure that your outing flows smooth on event day. Be it a large corporate outing, or a friendly round of golf with a group of friends, our outing coordinators will make your outing a truly memorable experience. Call, E-mail or use Contact Us to begin planning your special event. Outings are booked up to a year in advance and our calendar fills quickly!

Our outing services include:

Following your outing there is no reason to leave. Governors Run is pleased to offer guests our beautiful banquet facility. We have the capabilities to provide your guests with everything you need to entertain throughout the evening and long after. Including an elegant scrumptious dinner and enough space in for your musical, comedy filled or hypnotizing, memorable evening.

There are almost as many different formats for play as there are golfers. Most tournament groups select one of the following formats. Ask your tournament coordinator about additional formats.

Scramble: This format is probably the most enjoyable and is great for groups with mixed abilities. All players hit a tee shot, the best ball is selected and all players take their next shot from that point. This process is completed until the ball is “holed out.” The team then records a score.

Individual Stroke Play: Golfers play their own ball from tee shot to completion on each hole. Generally this format is recommended for smaller groups of avid golfers. 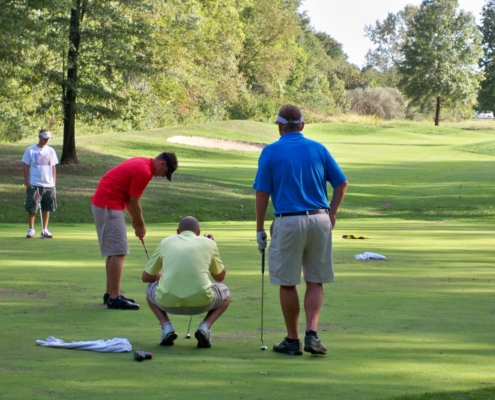 Closest-to-the-Pin: A prize is awarded to the player whose shot comes to rest closest to the pin, normally played on a par three hole.

Longest Drive: A prize is awarded for the longest drive off the tee to the fairway. Normally played on a par five hole.

Straight Drive: A white line is placed down the center of the fairway. A prize is awarded to the player whose ball comes to rest closest to the line. Normally played on a par five hole.

Longest Putt: A prize is awarded to the player who makes the longest putt on a specific green. This contest is often played on the practice putting green prior to the start of a tournament to get everyone into the competitive spirit!

Putting Contest: Putting contests are a great way to add a competitive element to your next golf outing. Our tournament services team is ready to create a putting contest for your guests that may help relieve some tension before their round or perhaps show off their skills after a day on the course. Putting contests are a fantastic fundraiser and a great way to heighten the fun of your event! Here is a sampling of our most popular contests, be sure to ask your tournament coordinator about set-up fees.

The Ace: Challenge your participants to putt from 25 feet out, then bring back the finalists to try sinking a 50 foot putt.

The Governors Challenge: Contestants can showcase their putting skills on this 3 Hole challenge on our practice putting green. We’ll create a fun par 6 putting course and provide scorecards for each player!

Scoring is often thought of as a somewhat complicated process for the uninitiated. Our Tournament Coordinators are available to help you understand the process, describe the nuances and actually score your event. The main points to keep in mind are listed below.

Stroke Play: The most popular tournament competition is stroke play. The winner is determined by the player who shoots the lowest total score for 18 holes.

Match Play: The outcome is determined by the player who wins the most number of holes, regardless of score. If Player A has a 4 on the first hole and Player B a 6, Player A wins the hole. If the game were stroke play, Player A would be ahead by 2 strokes.

Handicap: A predetermined number of strokes a player is allowed to deduct from the gross score to arrive at an adjusted score. This allows players with varying degrees of ability to compete at an entry level. Handicaps are usually established by an official handicap service.

Low Net: All players must have a handicap which is deducted from their gross score. This type of scoring can be used for individuals and teams.

Callaway: A great way to even out the field if the level of ability is widely varied. This scoring system allows each golfer to play their own ball out and record the score with no more than double par limit. Callaway scoring may be used when not all competitors have an official handicap. Allow longer time for scoring with this system.

Championship golf, a beautiful lake setting, and a ton of fun things to do nearby…Governors Run offers all the magnificence of the Ozarks with none of the traffic or big-city prices. Located only 2 blocks from Carlyle Lake and its public access beach, you can couple your golf-trip with a variety of camping, wine tasting, fishing, boating, hiking, sight-seeing and much more.

Our packages can be customized to include a variety of options tailored to your preference.

After a long day of golf, you can enjoy a quiet dinner at any one of several establishments within the city limits. Carlyle offers fine dining, fast food and several drinking/dining establishments. Your outing coordinator can provide you with a list of local businesses who will be delighted to cater to your group during your stay.

On a budget or enjoy the great outdoors? Carlyle also offers local campgrounds and cabin rentals in resort type settings which can be booked through the Illinois Corp of Engineers or just down the road at Hickory Shores Resort. It is our goal to make sure your stay is everything you want it to be. Call us at (618) 594-4585 to book your package today.